But, somewhere along the line, a mutation can occur, and a new branch of the mitochondrial tree is formed. This change of mtDNA is used to trace our ancestors back in time, to find out their migration routes and origins.

My particular mtDNA haplogroup, or branch of the tree, is H16. A haplogroup is the people who descend from a particular person in time, in which a mutation occurred, who now carry that same genetic marker.

This is from the 23 and Me website, explaining my H16 haplogroup:

Origin and Migrations of Haplogroup H16

Your maternal line stems from haplogroup H16, a relatively young group that traces back to a woman who lived approximately 6,000 years ago in the south or southeast of Europe. She lived near the beginning of the Neolithic, a period of cultural and technological revolution when the first farmers began to migrate west from the Middle East. As farming technology spread, European populations boomed, and members of H16 expanded west across the continent.

Today, members of H16 are found distributed throughout Europe. Though the group is widespread geographically, it is a rare subgroup of H, with an average frequency of approximately 1% across Europe.

And, now, what does this have to do with this week’s prompt?

In light of that, I thought I’d try to trace my maternal line as back as far as I could, within the restrictions of getting this posted in a timely fashion. And, making dinner, doing the laundry, completing the random projects around the house in various states of completeness, etc., etc., etc.

So, beginning with my mother, Bula Helen Wells:

And, unfortunately, that is where my little quest ends. For now. I have grabbed the low-hanging fruit from this tree, and without more time for research, it will have to do.

I hope you have a lovely Mother’s Day, either as a mother or as someone who has a mother. Which pretty much covers us all!

I decided this week to take a close up look at the 1810 Federal Census record of the Tubal Keen family of Boston, MA, to see what additional information I could find out. 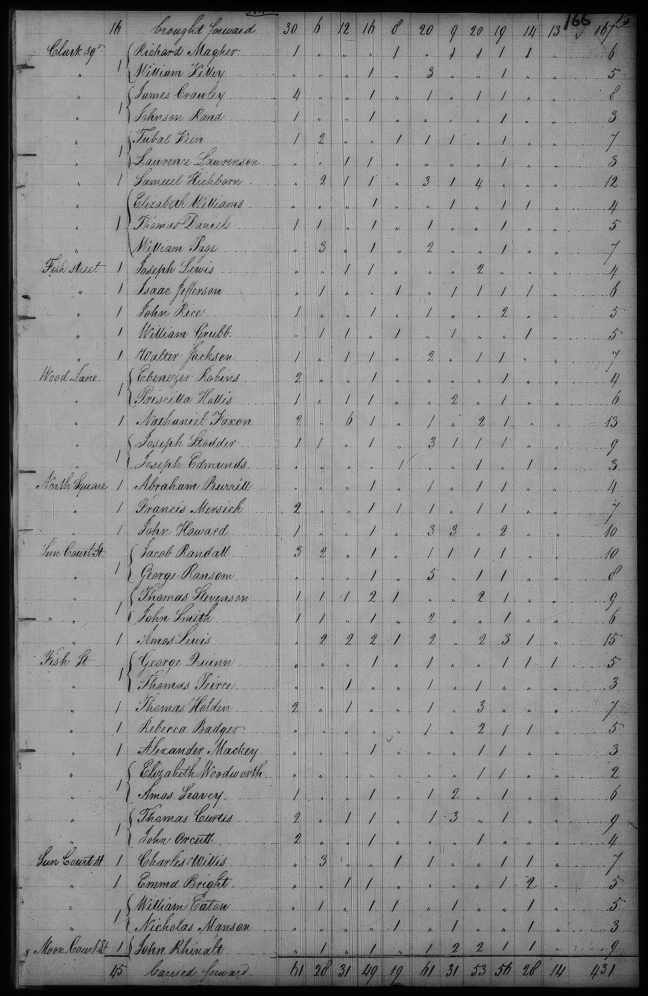 If you remember, I’ve recently discovered (through a state census record that led me on a profitable wild goose chase) that Tubal, my 4X great-grandfather, was indeed the father of Washington E. Keen, my 3X great-grandfather.

Tubal was born in Pembroke, MA, and was baptized in November of 1756. He served in the Navy as a midshipman during the Revolutionary War. After the war, on November 11, 1790, he married Susannah (Suky) Glover.

After Suky’s death, he married Sarah Ruck, my 4X great-grandmother, on January 14, 1796. Sarah was possibly Suky’s sister; that needs more research for another day.

Let’s see what the 1810 census might tell us about this family, shall we?

By 1810, Tubal and Sarah would have been married about 14 years. Any children from their union would then be under the age of 14.

Below is the line for Tubal and his family, listed with the other inhabitants of Clark Square, Boston.

The numbers in the columns represent the individuals living in the household, their age ranges, sex, and slave or free status. The double lines divide the males, females, and slaves.

So, from left to right we see that there are:

There is then a double line representing a division between males and females:

Then another double line, dividing free residents from slaves.

All together, there are seven inhabitants in the Keen household, and the numeral 7 for the total is in the last column on the right.

We know that Tubal and Sarah had four children:

Based on their birth years and the age ranges of the 1810 census, the two children 10 and under are Washington, newborn, and Margaret, about 10 (one male and one female).

The one female 10-16 would be Nancy, who would be approximately 13.

So, now we have a mystery. Who is the one remaining male child, 10-16, in the household? Hummm…

Let’s do some deductive reasoning, shall we?

In Sarah’s will and probate record she names her four children that I’ve listed above. In addition, she also names a grandchild, Mary Ann Ruck. Neither of her married daughters have the last name Ruck, so little Mary Ann isn’t the daughter of one of Sarah’s daughters.

Sarah’s last name when she married Tubal was Ruck.

One possibility is that Sarah Ruck was her married, not maiden, name, and she was a widow with a young son when she married Tubal, who was also widowed. By the time of Sarah’s death in 1826, her son, the father of her grandchild Mary Ann, was deceased, and therefore not mentioned in the will.

The other male, 10-16, could very well be this firstborn son, who would have been less than two years old when she married Tubal, based on the age range in the census.

Whew… that’s a lot of numbers and names! I commend you if you’ve hung in there to the end of this post!

I guess the point of all this is that in those seemingly straightforward little numbers across the census page is a story to be found, one of marriages and losses and the details of our ancestors’ lives, if one is willing to look closer.